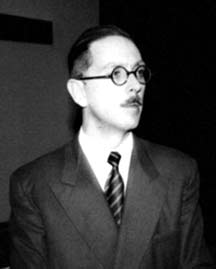 The Selman-Troytt Appreciation Society was founded in 1948 by Finlay Finlayson (left) who enjoyed the unique distinction of being the longest serving inmate in a German POW camp. He was captured on the first day of WWII when, lost and confused, he landed his surveillance aircraft in Switzerland to ask for directions. Unfortunately, he had miscalculated his position and was actually on the outskirts of Stuttgart.

His arrival only hours after the outbreak of hostilities caused embarrassment for the Germans who did not yet have a POW camp ready to house him. Whilst one was hastily assembled, Finlay stayed with brother officers from the Luftwaffe and here developed friendships so strong that for many years after the war he was suspected of espionage activities.

He was not liberated until late in 1947, his small and obscurely located camp having been overlooked completely by the advancing allies during their first, second, and third offensives. He passed his time fashioning chess sets from candle wax.

Although plainly still exhibiting the after-effects of malnutrition, he is shown here proudly wearing his 'de-mob' suit at the inaugural meeting of the Society. A personal note of Introduction from Mr Finlayson is available here.

The Society he founded is dedicated to researching and republishing the extant writings of Jeremy Selman-Troytt and to compiling biographical details of those family members and acquaintances who may have influenced his work.

Mr Finlayson's excitement at the recent re-publication of Jeremy's work is recorded in the 'Preface' here.

How You Can Help

Errata: In an archiving task of this magnitude it is inevitable that mistakes will occur - whether they be errors of typography, composition, compilation or, indeed, of fact. If you should notice any such error, we ask that you bring it to our attention so that we can correct it. Please Contact Us stating the nature of the erratum and the Title or URL of the web page upon which it occurs.

Support: Anyone who is interested in becoming a 'Friend of the Society', thereby furthering its researches and publications, should visit this page.

Sharing: Those wishing to record their reactions to The Selman-Troytt Commemoration, or who would like to share comments with other excited visitors, should avail themselves of the Social Media icons below.

Contributions: Contact us also if you have biographical details or photographs of the Selman-Troytt family which the Society does not possess or has been unable to purchase. Sadly, such memorabilia is selling for increasingly higher prices as Selman-Troytt's popularity surges. As the Society is dependent upon patronage, its budget for acquisitions is increasingly strained by such inflation.

Gifts: The Society has a number of touching gift items suitable for presentation to loved ones ... even if they are homosexuals. These include various unique postcards as well as a range of tasteful T-shirts with such slogans as: 'Even the thought of you makes me moist' and 'I long to wake and find your face at my porthole'. Please visit our store to examine Selman-Troytt Memorabilia.

Spreading the word: The recent re-publication of Selman-Troytt's work has flushed the Society with excitement. Details of the re-publication can be found here. The Society receives a few pence for each copy sold and all such recompense helps the Society to continue its work. Please consider buying a copy for a friend or loved one who is confused about the workings of their bodily parts.

Principal Figures within the Society

Memorabilia
Home
Life & Context
Works
Family Tree
S.T.A.S.
Postcards
Contact
: © S.T.A.S 1948-2022 : Site by Knowledge Generation : Site Map :
Special Note for Web Historians
The Selman-Troytt Postcard Emporium is the oldest purveyor of E-cards on the Internet. A copy of our first Royal Warrant may be examined here. Since the granting of this illustrious award we have been patronised by aristocrats, many of whom insist upon using Selman-Troytt cards to express the depth and sincerity of their affections. Indeed many of our cards - particularly those concerned with incest and paedophilia - have been inspired by a close examination of the aristocracy.
We store no cookies on your device, sell no personal data and send no spam. By using our web site, you agree to the terms of our Privacy Policy